More than 7,000 federal employees live in Virginia’s Sixth Congressional District. Thousands of them have been furloughed or have been working without pay since the Trump-imposed government shutdown began on December 22.

On Friday these employees missed their first paychecks of the shutdown, leaving many of them wondering how to meet basic expenses for food, rent, mortgages and child care.

But there’s no sign that Congressman Cline has taken the slightest interest in their fates. On Friday evening he attended the Woodstock Fire Department Spaghetti Dinner. That was a good thing to do. But perhaps he could follow the example of Congresswoman Elaine Luria and also meet with some of the Transportation Security Administration agents at the Roanoke airport who have been working without pay since December 22 to protect the safety of airline passengers and crews. 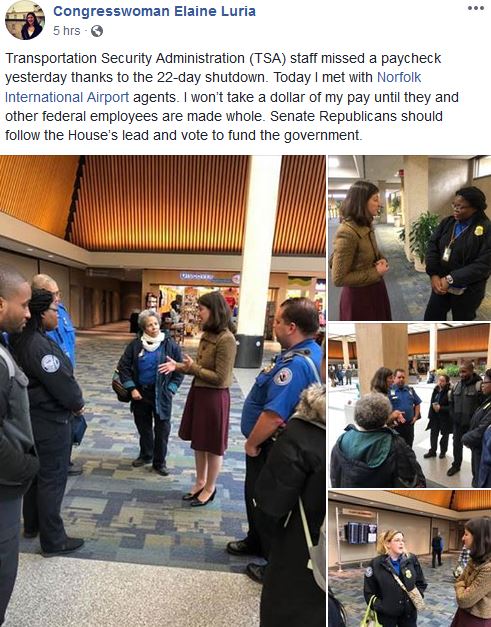 (Congresswoman Luria has said she won’t take any of her Congressional pay until the shutdown is over. Several persons have contacted Cline’s office to see if he is doing the same, but have not received responses.)

Meanwhile Cline stands loyally behind President Trump, suggesting that the solution to the shutdown is in the hands of House Speaker Nancy Pelosi, The best he can come up with is a lame joke and a mild suggestion that Republicans might be willing to compromise on Trump’s demands.

“I’m happy to call it Nancy’s border protection barrier – it doesn’t have to be called a wall – if that satisfies her,” Cline added. “And, on our side, the president might not get $5.6 billion for the wall that he wants. It might be 5. It might be 4.6.”

In fact Trump has shown no willingness to be flexible on the amount, and even rejected an effort by Vice President Pence to arrange a compromise.

Meanwhile Cline dutifully voted with most House Republicans against appropriations for government agencies providing essential services, including food safety inspections and, yes, the border security that he and Trump profess to be so concerned about.

As border security workers being forced to work throughout the shutdown, some unions are reporting that their employees are being overworked and understaffed. Carlos Favela, a spokesman for a border patrol union in El Paso, Texas, told the Los Angeles Times that “our agents are being stretched thin.”

Away from the border, federal courts and immigration judges who were already backlogged in over 800,000 cases before the shutdown have all been furloughed. Pending cases and hearings will now have to be rescheduled, with the average wait time exceeding two years. Essentially, migrants will be able to stay in the United States longer despite Trump’s desire to curb illegal immigration.

And as The Washington Post points out, it’s not just federal workers and their families who are suffering.

There are the tens of thousands of contractors who rely on the federal government but are not full-time employees and are not likely to receive back pay. There are the stores, restaurants and other businesses that are hurting in cities and towns across the country, with workforces dependent on patronage by the government and its employees. The national economy is taking a hit, too, with estimates putting losses so far at $3.6 billion. And U.S. taxpayers are not receiving the government services they pay for, such as food inspections or museum exhibits or care for precious national parklands.

The longer the shutdown persists — and Mr. Trump has blithely talked about months or even years — the more the damage will compound. It shouldn’t come to that. Republicans in Congress who see the harm that is being done to their constituents need to work with Democrats to end this intolerable situation by reopening the government.

2 thoughts on “On shutdown, Cline sides with Trump instead of his constituents”